Message in a Bottle found off Orchid Island


A message in a bottle that I cast from a ship has washed ashore on Orchid Island off Taiwan and apparently it has made big news on the little island. 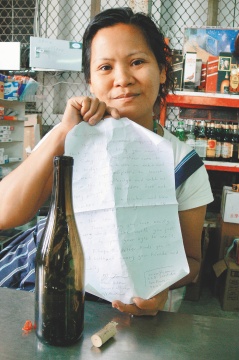 A friend of the woman who found the bottle emailed me to say "I just called the village a few minutes ago, everybody knew about your letter. The island is so small, everybody knows everybody's business. :-)" and continues "It is a BIG wonderful, happy news for everyone in the island. Your letter brings Orchid Island good luck and a talk for the next few years - I am sure!!!"

The original news story is here: udn.com. I'm waiting on a better translation of the story, but in the mean time here is all I have:

Lives in Lanyu's Xiao Wei reaches in January takes a walk when the seashore, picks to a jar, in has one English letter which prays for heavenly blessing from the crew, she is excited, the San Francisco address writes in reply thanks according to the letter in; Although has not received the reply, but she deeply believed: âmy this year certainly ultra lucky!â

In the bottle the letter by signs the Oliver Hickman person to mail out, the body is two he in the navigation journey, installs completely the full blessing in the green glass jar, floated the Lanyu shore along with the ocean current.

37 year-old Xiao Wei reaches, is two child's mothers, in the Lanyu peasant association ultra business work, likes the seashore taking a walk, seeks for âthe treasureâ in the tidal zone, sometimes is the shape special drift wood, perhaps the attractive jar, âI have thought the sea can bring for me is surprised and is joyful, has not thought of the real occurrence.â

After on January 10 she front the out of office silver tribe the bay picks, invites friend translator immediately. In the letter first âThe first role about shipping that you have to bring your own fun (transportation's most important task was you must find belongs to own pleasure)â, she confirmed that was the crew writes.

The crew describes in the letter â(translates) this world everywhere feature fun, the love with happily, you only need to open your eye to be able to seeâ, finally prays for heavenly blessing the human who and the family member, the friends picks the letter can the health.

This is the second message in a bottle of mine that has been found, here is the first.

See also: Wikipedia page on Orchid Island and a map of Orchid Island unfortunately with no detail but it does show how remote the island is.